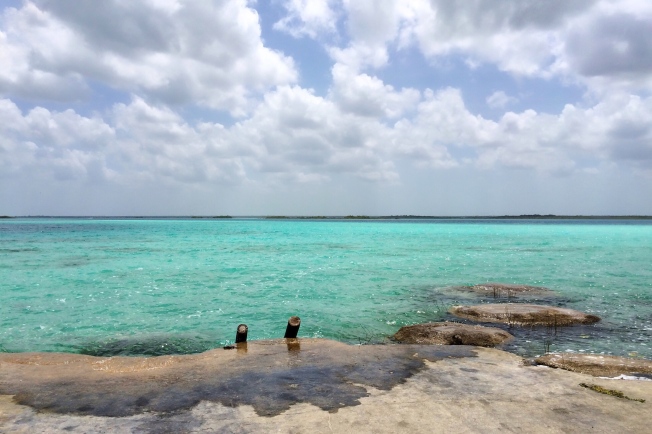 We weren’t supposed to stay there, in fact we considered driving right on by and not even stopping.  However, we hate to feel like we might have missed something (like a talking cross that doesn’t talk, or incidentally – sing!).  So, into the town of Bacalar we went.  The town is small, and still relatively untouched by the tourism hordes.  In fact, it reminded me of the quiet, bohemian feel of Playa Del Carmen long before the overflow from Cancun turned it into a perpetual spring break.

Maybe we were lucky, maybe it was kismet or maybe we simply paid enough travel dues (like flying all the way to Ecuador next to “Forrest Gump” , getting his views on the countries’ high altitude, “lawdy, lawdy it’s high up in there”) – whatever the reason,  we found ourselves outside this gate…

Our tentative knocks on the gate were greeted by a young women’s head squeezing out of the smallest crack in the gate opening.  We explained to her head that we were looking for a room for the night. We must have looked normal and harmless enough, with one teen’s face stuck to the screen of his phone, and the other scarfing Mexican Doritos and thus we were allowed into the secret chamber.  As soon as we walked in, the reason for the secretive nature became clear…

Who wouldn’t want to guard this?

The hotel had 5 cabana type rooms, right on the lagoon, nestled in palm trees.  Lucky for us, one of the reservations had decided not to show up and we were more than happy to take their place!

A room with a view. 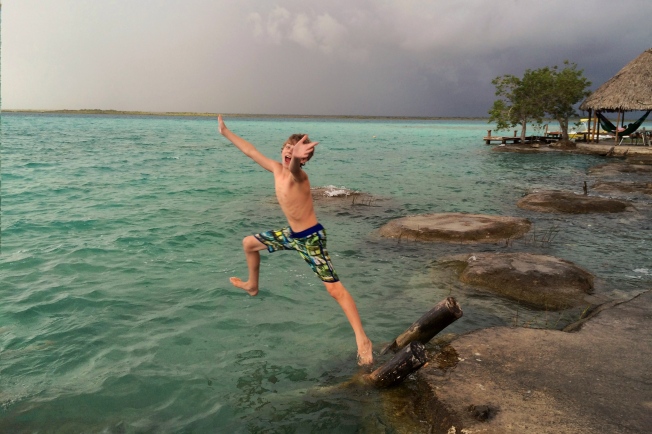 Or making use of the hammocks… 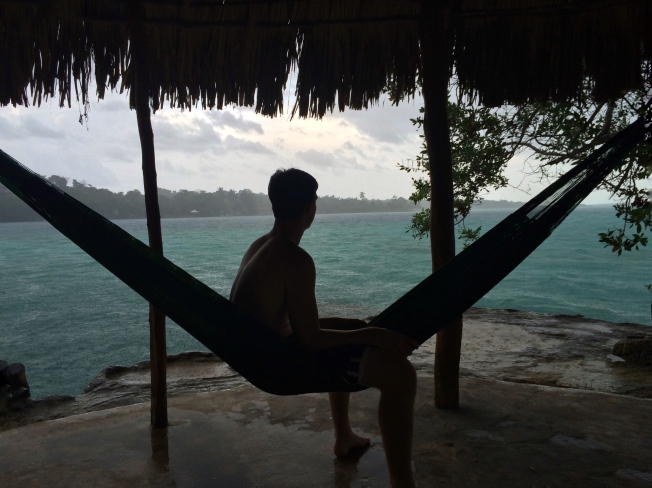 Or digging our toes into that soft (albeit a little creepy in that soft squishy, ‘what exactly is that stuff’  kind of way) spa like mud/sand lagoon bottom.

Or lounging and enjoying meals in the open air lobby… 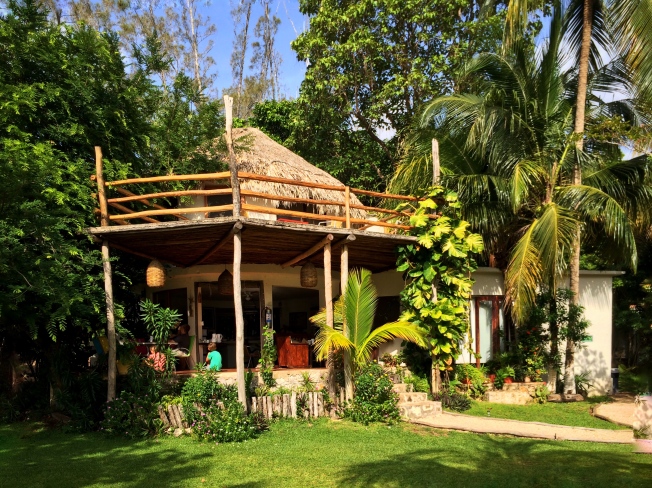 Or hanging out on the jungle encased swing set…

But, eventually we had to say goodbye and move on down the road…

At least now, we know where the road leads

and how to gain access into the inner sanctum…

Until we meet again…

For more travel in Mexico:

Somewhere in Mexico: The Talking Cross

Thanks for the Memories, Mexico

Before I had kids, I tried to imagine the type of parent I would be.  In all scenarios, I feel pretty confident I was the coolest, most inspired and creative mom ever!  I also feel fairly confident in none of my Norman Rockwell-esq Mom visions was I referred to as the “food dictator” or “nutrition tyrant”.  But, sadly, these terms have both been used to describe aspects of my parenting.   I all at once resent and resemble these remarks.  It is true, trying to make sure my family is eating healthy and not ingesting poison hidden in food has been a primary goal in my parenting strategy.  My kids would say the goal consisted more of terrorizing them with whole grain bread and massive amounts of broccoli.  But the truth is, I just want them to be healthy, strong and not have strange tumors growing out their ears by the age of 20.

Like any good dictator worth his/her salt, I have had to work very hard to protect my subjects from themselves.  Along the way, this has meant not only supplying them with healthy foods, refusing to purchase foods deemed unworthy and limiting questionable foods, it has also required declaring the occasional all out Ban on the most harmful and unacceptable food creations.

For instance, there was the “Sugar Ban” for my first born when he was 0-2 (he maintains the applesauce sweetened cake I made him for his first birthday  party is a clear cut case of child abuse) and “Sugar-Ban #2” for my second born when he was in preschool (he says he will work it out in therapy later).  Then came the “Soda Ban” , the “Artificial Sweetener Ban” (seriously, ants won’t even eat it),  the “Hydrogenated Oil Ban”(it does such great things for the butt), the “Nitrates Ban” (who cares if your lunch meat is gray?), the “All Plastics and Canned Goods with BPA Ban”, the “Microwave Popcorn Ban” (that one really hurt), the “Doritos Ban” (I believe this was when the term “Nutrition Tyrant” emerged),  and the “Gatorade Ban” (because what better way to reward an athletic body than by dumping flame retardant into it?), to name just a few.

However, the most recent ban left all my subjects shaken and cowering in fear on the kitchen floor…”The Microwave Ban.” You see, a few months back, I decided we had dumped enough microwaves into our bodies for a lifetime and pulled the plug on the microwave – literally.  Playing right into my hands was the fact that the monster had taken to running with the door fully open and at times, refused to shut off.

As if we had never warmed food in the dark ages before microwaves, I began to come upon bizarre and disturbing scenes in the kitchen – soup being heated up in the oven, beans being burned in a frying pan on the stove, blank stares at mugs of water needing to be heated, whole dinners in the oven on the actual dinner plate – or even worse, person trying to eat off the scorching hot dinner plate after coming out of the oven.  But despite begging and pleading on the part of my minions, I unrelentingly held my ground on  “The Microwave Ban”.

History will tell you, every dictator must endure his/her share of rebellion and subversive decent.  I don’t fool myself that there haven’t  been plenty of insubordinate acts occurring behind my back.  Lucky for my kids, they have always found a willing co-conspirator in their Dad. However, with help from sometimes eager informer (Pre-Teen) and my  keen sense of observation (empty Doritos bag in the trash) many of these mutinies did not go undiscovered.

But, with age and oppression comes ingenuity.  One morning, several months into “The Microwave Ban”, I walked into the kitchen to find the microwave missing from its place on top of the refrigerator.  You see, even though I had relieved the microwave of its duties, even my tyrannical heart had not been able to evict it altogether.

Teen: “We were doing something with it.”

Apparently in the night, Teen had found a willing rebellious accomplice in a friend staying for the night.  They had decided, somewhere after the midnight hour when the dictator was fast asleep, to haul the microwave outside onto the back porch a do what they had always wanted to do…zap stuff you are not supposed to zap in a microwave…ever!

Later the next day, these videos appeared on Facebook:

Because, every good rebellion deserves to be documented.

More tyranny on Sweet Spot:  Down With Fish Tyranny

Payback to the Food Dictator:  The Rebellion Rages On