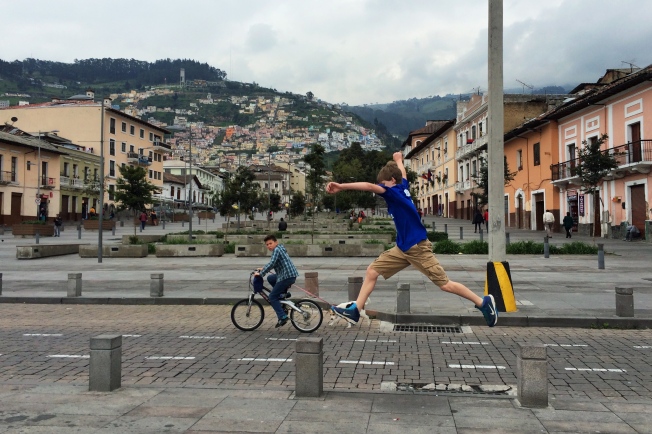 Were the first words we heard from fellow passenger on our flight to Quito, Ecuador -(picture Forrest Gump meets Yosemite Sam).  Unfortunately, having to answer “No” to this question opened us up to a complete narrative including statements such as “Lordy, Lordy it’s high up in there” (the high altitude?).  Actually, only my husband was treated to the full show (’cause he is too polite), as Teen1, Teen2 and I shrunk into the sanctuary of our devices, picking up only enough one liners from our new friend to be annoying later on.

Starting out the trip under such auspicious beginnings could only mean one thing…of course, a completely memorable travel experience.

Initially the main goal in going to Ecuador was to, duh,  stand on the equator(and to go anywhere warm).  However, in the very first moments in Quito, we fell in love with the country, its people, its mountains, its cities, and its cheap gas! 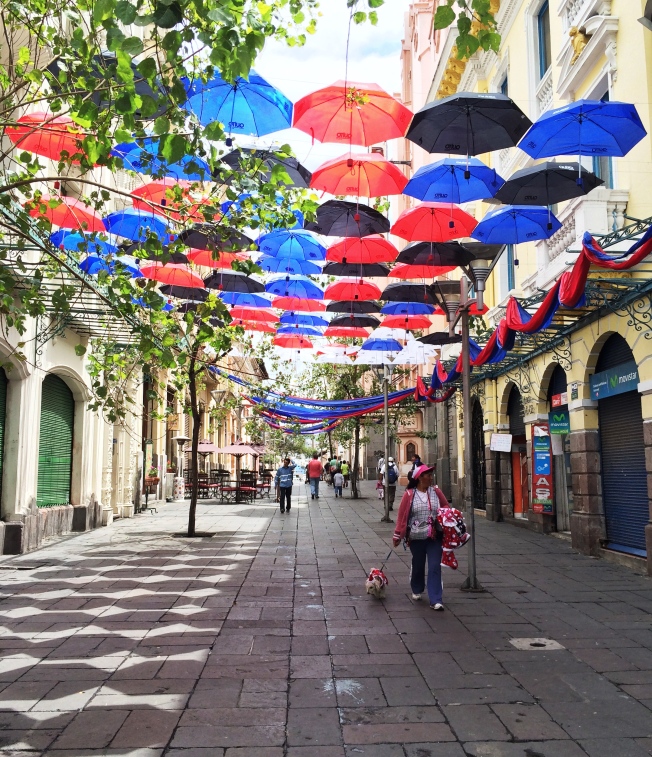 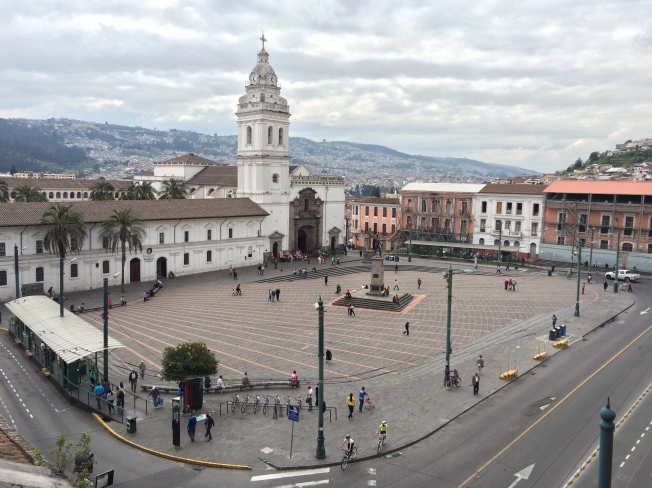 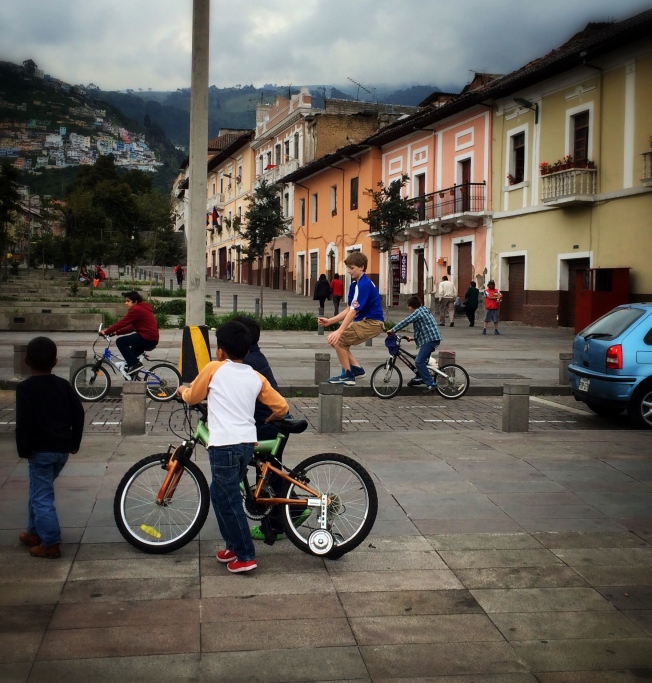 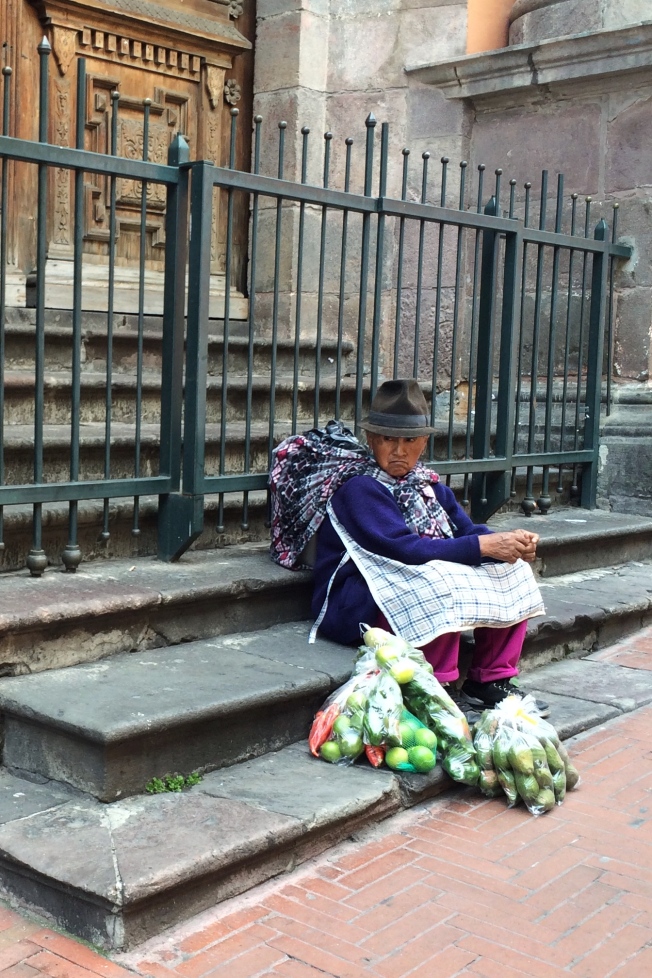 We sat on the convent steps and rested with this colorful Ecuadorian woman as she sold her fruit. I don’t think we helped her sales. 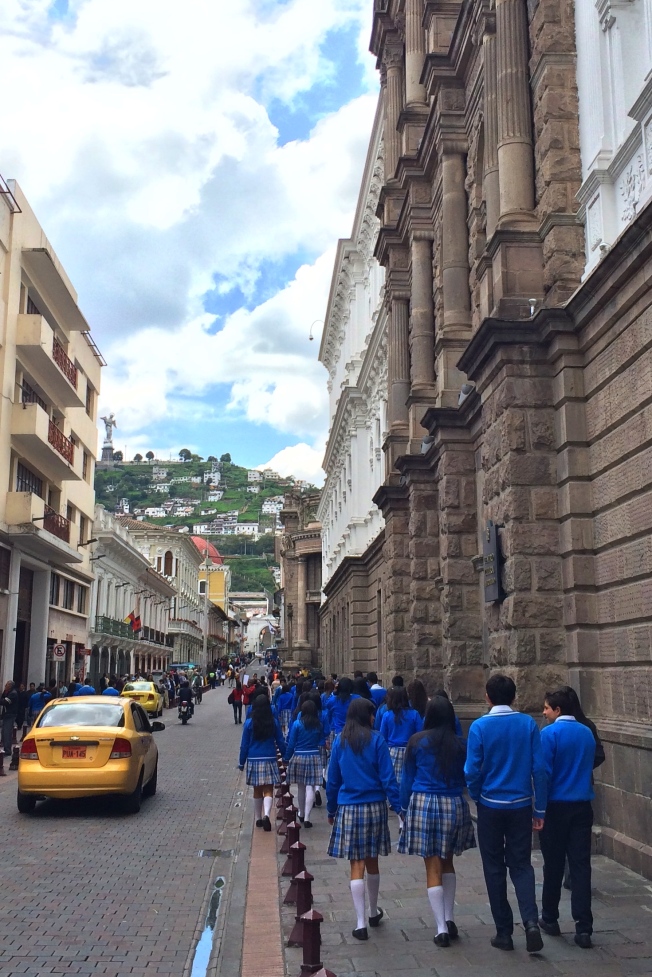 Apparently, the original monument, Mitad del Mundo (“middle of the earth”), is not actually in the middle of the earth, but rather 600 feet away from 00 coordinates – who knew? The French scientists, who calculated the original coordinates, did a pretty good job in the 1700’s given the tools of the time.  But like indoor plumbing and shows with zombies, GPS is better.

We tried all the “tricks” at the equator – walking the line with eyes closed (harder than you think) to feel a magnetic pull between hemispheres, balancing the egg on a nail, which is supposed to be easier at 00 (only Teen2 felt the magic), and watching a demonstration of water swirling different directions in the Northern and Southern hemisphere.  Truth or trick?  I have no idea, but we had fun trying to figure it out!

Good thing they did not ask me to say the alphabet backwards, too!

The symbol of the city – Virges del Panecillo

She overlooks the city from atop her hill and can be seen from almost anywhere in Quito.

We were able to ditch Forrest Gump at the airport before he made good on his offer to show us around. But he was right about one thing… Lordy, Lordy, it is high up in there!

For more on Ecuador:

Ecuador Part 2:  Getting Mobbed and Spit On in Cuenca

Ecuador Part 3:  Throwing My Kids Off a Bridge in Banos