Pigeon King of the Corn

In total, our time in Bogota, Colombia amounted to not much more than a long layover on our way to Lima, Peru. However, we are always prepared to make the most of our time – even when it is limited.  In such cases, it is necessary to become street walkers.

Not the kind that make money (although we could have used the extra pesos), but the kind that leave the hotel and don’t return until the “route” is done – hitting all the necessary, not to miss, points of interest.

And while it is true, I like to make the teens hang out in doorways…

For the most part, we keep on the move in order to see all we can in our short time.

And because pigeons everywhere seem to have an insatiable desire for corn (or, well, anything) …

Pigeon feeding in the Plaza

Next stop, Senora del Carmen church (or as we came to call it “The Candy Stripe Church”). Sometimes, I get sidetracked enjoying the people in a city – like this adorable Mom and daughter in matching pink animal print… 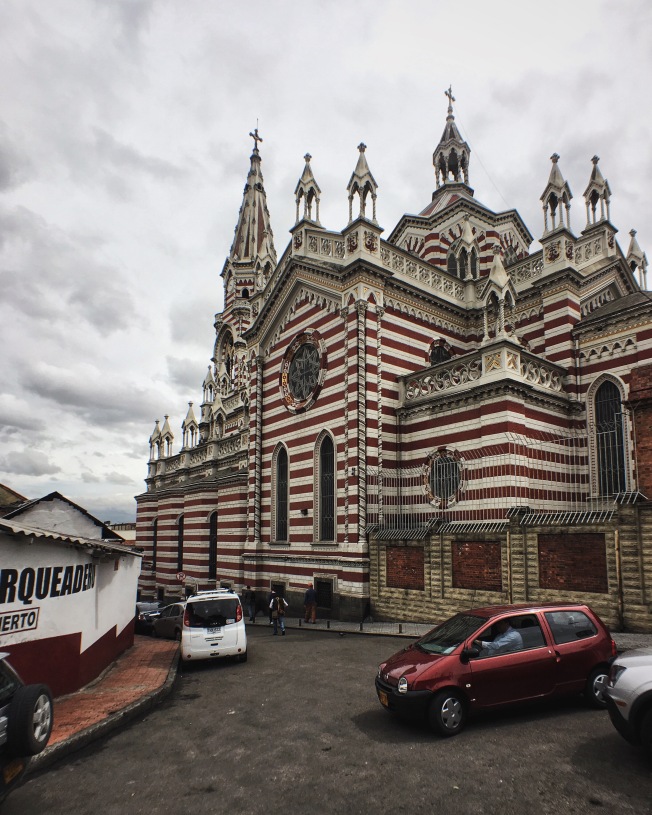 But, I eventually get back with the program and on with the route. 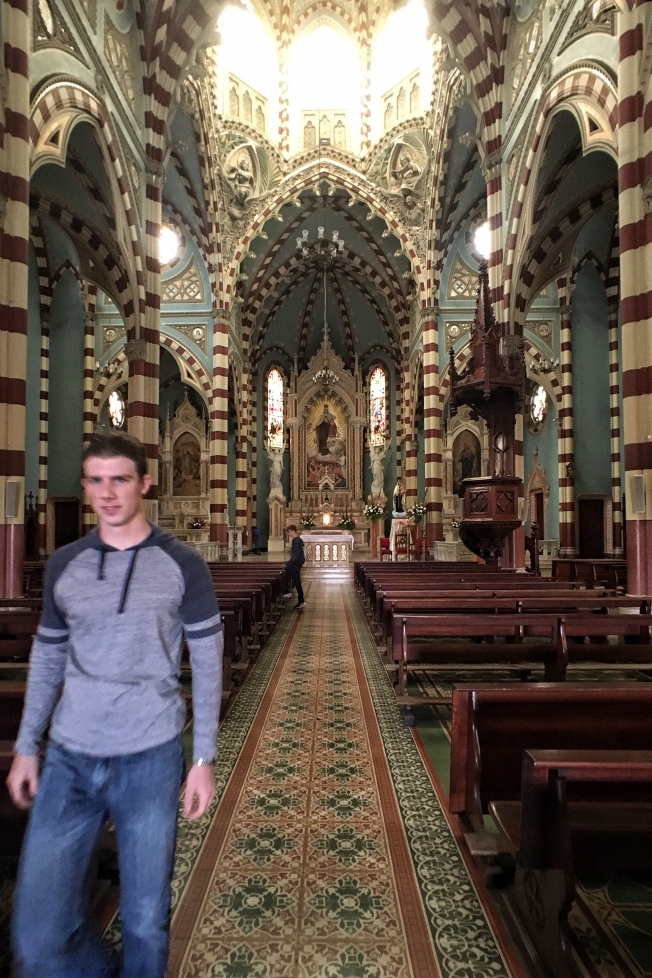 We also wandered past the President’s house where they were getting ready for…something – no one seemed to know what exactly, including the police officers on duty.  We stood around waiting with the rest of the mystified crowd for a while but eventually decided to press on.

We did not want to be too late to go through the gold museum – the Museo International de la Esmeralda.  As Teen put it – he did not want to miss a chance to be surrounded by all that wealth. 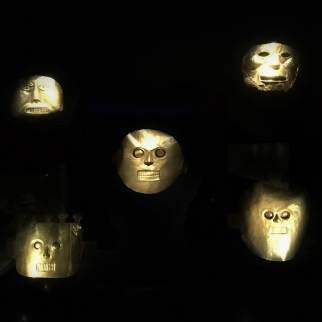 And with some last appreciation of the architecture.

Some hanging with the locals…

We were back at our hotel to enjoy the view of the rooftops before flying to Lima the next day. 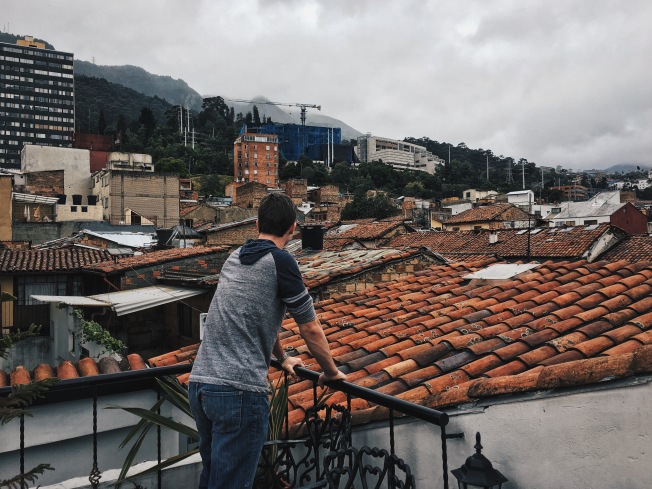 For other posts on Bogota and Peru: Go Here

Next time:  Peru: Flying over the Lines of Nazca!

Italy is awesome!  Or so, my boys have proclaimed.  Seriously, what is not to appreciate about a country that has so much to offer a boy’s sensibility – especially from a Teen/Pre-teen boy perspective.  Please, allow me to explain:

1.  You get to learn about crazy people.

The Pieta (The Pity) Statue by Michelangelo, Vatican City.  Yeah, yeah, this statue is beautiful, impressive, stunning, etc.  But, did you know it is encased in a plastic protector because in the 1970s, a “mad geologist attacked the statue with a hammer.”? (say what??) Right, well, apparently, any way you slice it this story was clearly cool enough to spawn a steady laughter invoking exchange for the remainder of our trip such as the following:

ok, it still makes me laugh…

Trevi Fountain, Rome.  Let’s face it – any opportunity to throw stuff…legally… is well worth a long plane ride. But take note – don’t even waste coin after coin after coin trying to nail the Trevi seagulls, they are way, way too saavy to be caught by such an assault (and I suspect, have had to learn the hard way!). 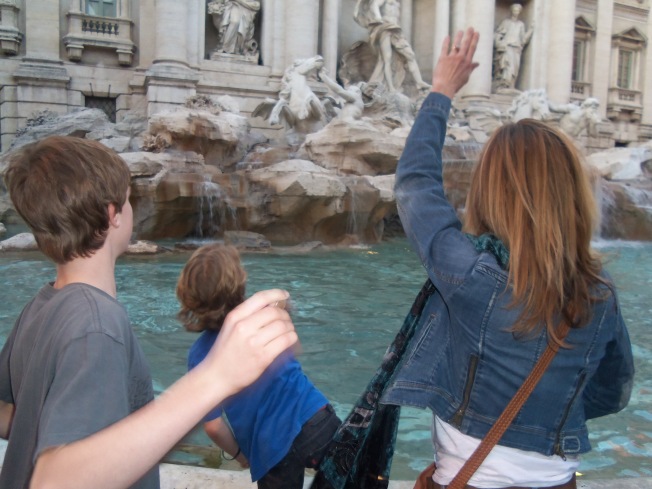 Random fountain in Rome.  Just pray, the water isn’t as ancient as the fountain… 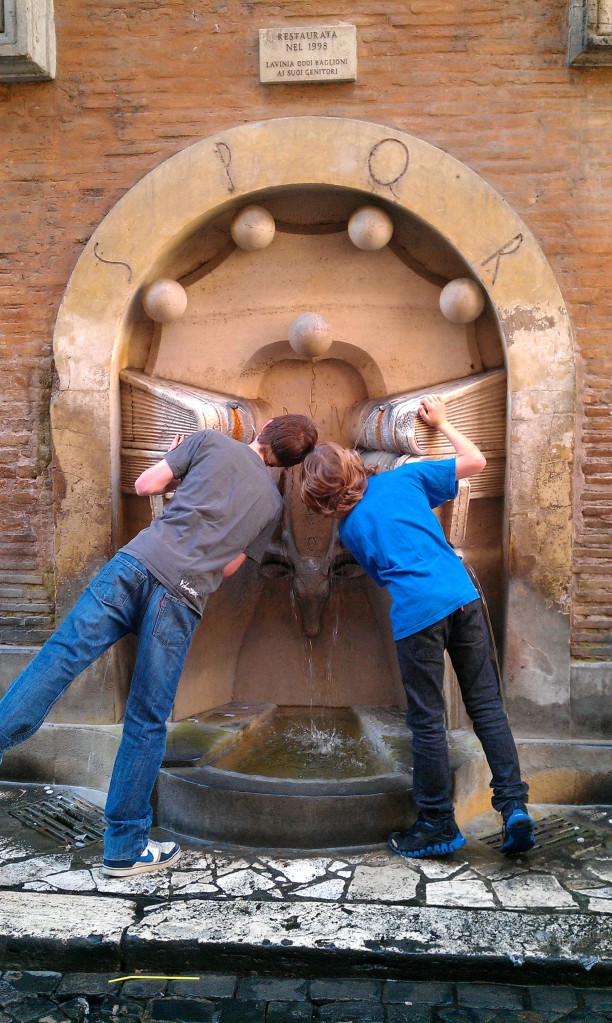 The Colosseum , Rome.  Sure, the whole Colosseum thing is crazily impressive and all,

But even better is collecting some ancient Colosseum dirt to bring home.  Just be warned – apparently a bag of dirt in ones backpack is cause for suspicion and, if you hazard the attempt to bring home said souvenir, you will be detained at every single security checkpoint along the way.

5.  You get randomly photo bombed.

Navona Piazza Street Performer, Rome. Anytime, anyplace, anywhere – you never know exactly when it is happening.  It won’t be until viewing pictures at some later date you will realize you were, yet again, photo-bombed by a statue’s bare butt (or other random, bare body parts) making for endless amounts of humor opportunities.  Ah well, you know, when in Rome…

Venice, Italy.  What better attribute does a hotel have to offer than the ability of customers to be able stick their head out of their very own hotel window and spit right into a not so clean canal of water that can’t be hurt  by a few dribbles of spit, anyway.  Pure genius, I say. 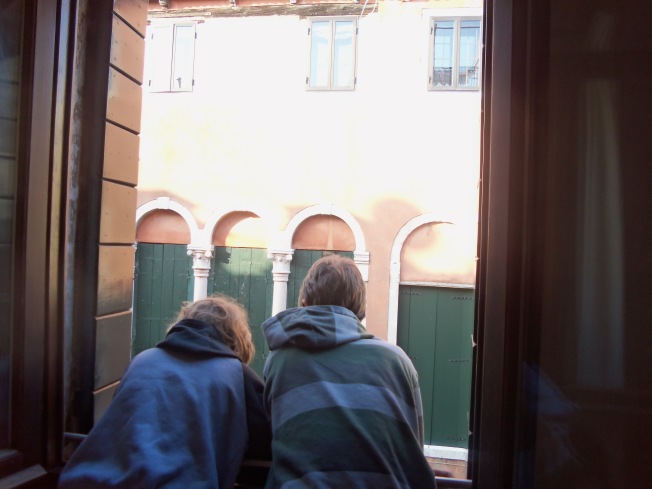 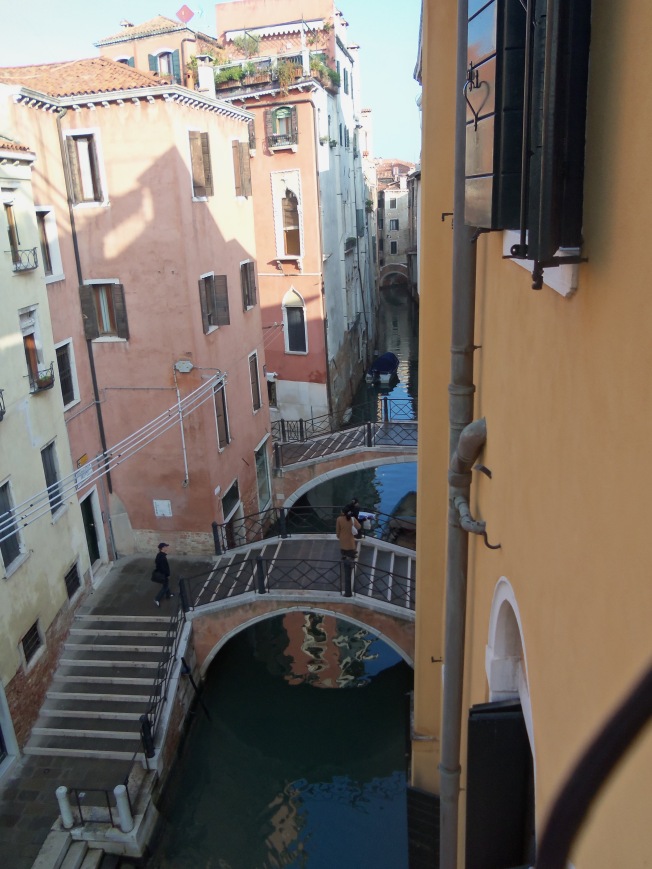 7.  You get to handle wild animals.

Venice, Italy – some piazza somewhere.  From a boys perspective, never underestimate the entertainment value of handling a rodent with wings (i.e. pigeons).

9. And some things, are just plain cool – graffiti and all!